This volume starts with the details of very first talkie film of India i.e. AALAMARA'.

The film was released on 14th March 1931 in Bombay at Majestic Cinema, Girgaon.  With the advent of talkie era, songs became the integral part of almost every film which boasted like '100% Talking, Dancing, Moving' film.  As it was too early for the development of Playback System, artists were desired to sing their songs themselves. Seven songs were included in 'AALAMARA' sung by the artists of the film like W.M.Khan, Zubeida, etc. themselves.  This decade included a film titled INDRASABHA, released in 1932 which had as many as 71 songs, a record yet to be broken !
931 Hindi films were censored during the first decade of talkie era and 9,000 songs are estimated to have been set to tunes by the maestros of this era.  The details of these films and their songs are compiled in VOLUME-I [1931-40] of HINDI FILM GEET KOSH which was released on 8th October 1988 at Birla Kreeda Kendra, Girgaon Chowpatty, Bombay by Maestro Naushad Ali in the presence of another legendary personality Madhulal Damodar Master who entered in the field of film music right from 1931 itself !  To enliven the occasion, other film personalities who were present included P. Jairaj, Shanker Dasgupta, Ramesh Gupta, Ramchandra Pal, Sushila Rani Patel, Qamar Jalalabadi, Sahu Modak, Snehal Bhatkar, Talat Mahmood, Rajkumari, Bhagwan, Sulochana Kadam, Kersi Mistry and Sitara Devi.   Kersi Mistry represented his father Phiroze Shah Mistry who had composed 7 songs for the first Indian Talkie (Hindi) film 'AALAMARA'. The details of  931 films have been covered in 726 pages of the compendium.  HINDI TALKIE FILM INDEX [1931-87] was also released with this Volume.
It was the 4th Volume in the series of HINDI FILM GEET KOSH published in 1988 and Volume-III, Volume-II and Volume-IV had already been released earlier in the years 1980, 1984 and 1986 respectively.
All the stock of Volume-I [1931-40] has since been sold out and its Xerox edition is being made available to the music lovers.  Sample page is appended. 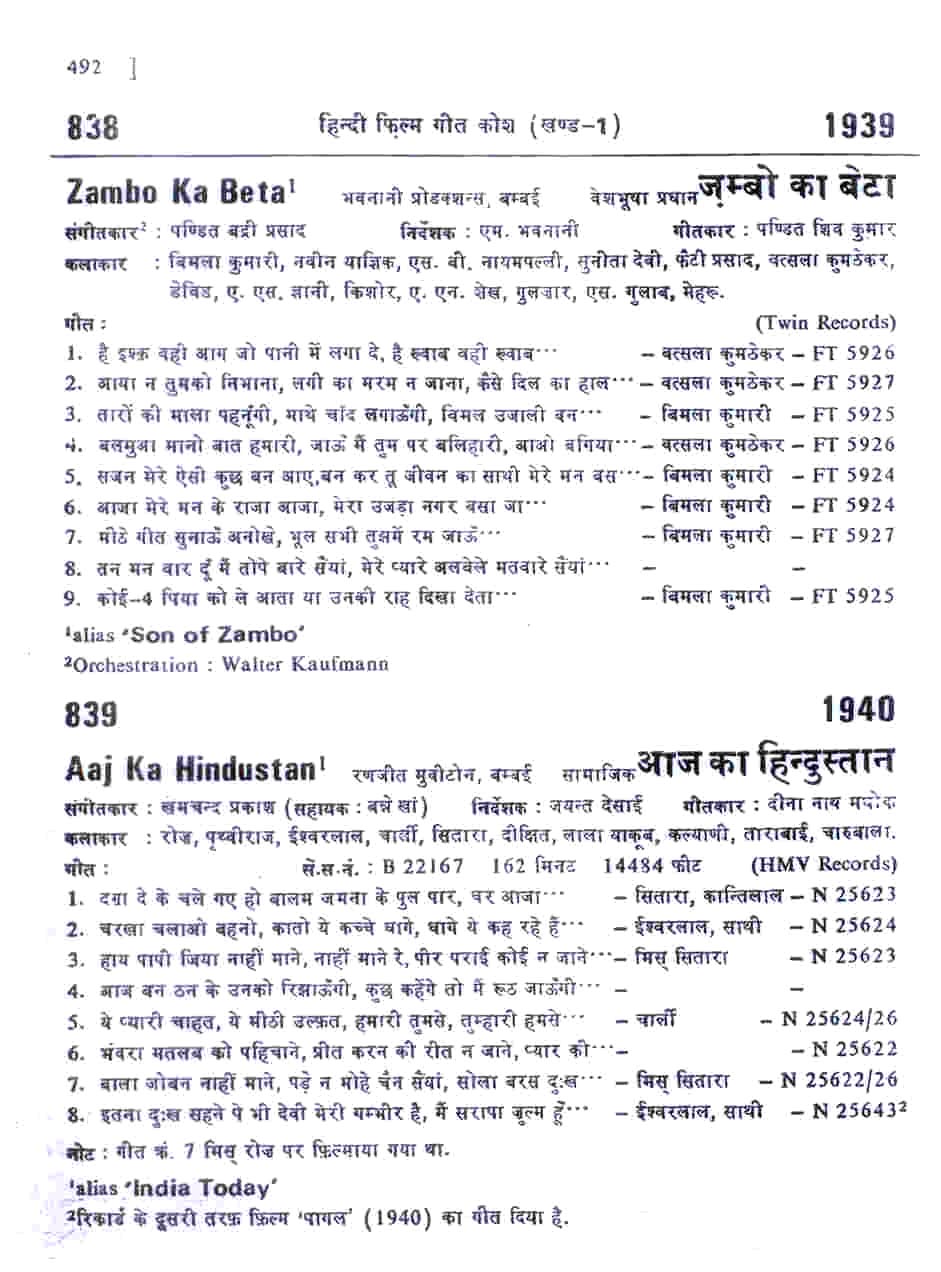